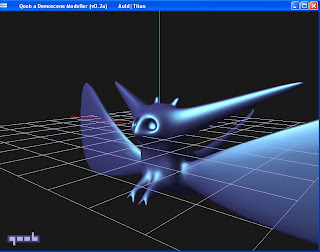 So, Qoob, the tiny modeller, finally is competent enough to model simple characters. Its all a bit pikachu for now – but that may be more my inner pokemon than the tool, not sure yet. The qoob library grew hardly at all to support this, only the modeller.

Characters are about 200 bytes. Thats ok but not great. The culprit is picking. You do quite a lot of polygon picking to model the limbs, eyes, nose etc. Click on the images to see larger versions. 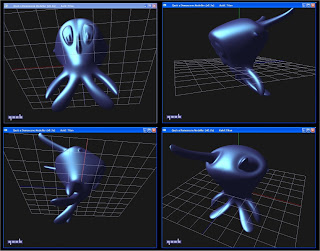 Picking consists of a command (1 byte) and a polygon (3 bytes). Thats 4 bytes before compression. Assuming the command compresses well, the specific polygon id is the problem. A lot of the time the first byte will be zero which will help. Still, we can assume a total of 3 bytes on average per pick after compression. These models take about 50 picks. Hence 150 bytes as a base. Ideas:
1. Store the command pick n times, (meaning select the next polygon n away in the array). This means great compression but even so, thats a lot of data to compress and there may be problems.
2. Duplicate what the modeller does, by storing the 2d pick co-ordinates and have qoob lib project that into polygon space. Well its 2-3 bytes anyway and then the projection code. So no.
3. Delta encode the polygon id. In my modelling at least this would help often. Polygons being picked often come from the same base polygon in the model before subdivision and therefore their ids are similar.
4. Exploit hierarchy of subdivision more … have to think here. In theory a polygon might be identified by 3 bits for original face of cube (the base input)2 bits x n where n is the subdivision level.
5. Restrict picking to be pick + grow pick. This would help with large groups of polys but the modeller would go nuts.

… hmm need to think more, none of the above convince me.